It is a devastating indictment of the US and UK educational systems that after 12 years of full time education as many as a quarter of all children leave school unable to read properly.  This huge waste of talent and the human and economic costs it engenders, is the motivation behind Joe Elliot and Elena Grigorenko’s book, The Dyslexia Debate.  But their suggestion that we should scrap the whole concept of dyslexia is profoundly misguided.  They argue that at present there is no way of deciding who is ‘dyslexic’ and who is a poor reader for other reasons.  So they claim that all poor readers could be called dyslexic.  Since this ‘diagnosis’ doesn’t help to improve their treatment, and, they say, it does more harm than good because its use diverts resources to a favoured few who can effectively ‘buy’ the diagnosis unfairly, they argue that the whole concept should be scrapped altogether
Here I argue, on the contrary, that scrapping the term ‘dyslexia’ would be a huge mistake.  A diagnosis of dyslexia relieves a child enormously of doubting his own abilities and feeling stupid, and more importantly, our progressively greater understanding of the neuroscience of reading, means that we are now close to being able to identify those with true developmental dyslexia in its original neurological sense, encapsulating its aetiology, which will enable us to develop more effective treatments, targeted to each individual.

The ‘phonological theory’
A major problem has been that reading problems have been mainly studied at too high a cognitive level (see figure below), so that explanations have become almost tautologous.   Currently the most favoured hypothesis which purports to explain dyslexia, postulates that it is due to a ‘phonological deficit’; dyslexics cannot ‘decode’ the written word, ie they cannot successfully translate its letters into the sounds they stand for.  But this is really a tautology; the essence of reading is letter/sound translation.  So this phonological ‘theory’ is set at too high a level; it merely redescribes the fact that dyslexics find it difficult to read.  Hence it is not at all surprising that most poor readers have a phonological deficit.  Of course we cannot distinguish a subgroup of dyslexic readers on that basis.
The interesting question is why these children fail to learn to decode.   To find answers demands studies at a lower sensory processing level: why can’t some children identify letters and their order visually, why can’t they hear the separate sounds in words to match with the letters?  If the condition, dyslexia, does exist, then we ought to be able to find it by searching for the mediating sensory processing deficits that cause the problems.  Grigorenko and Elliot admit that greater understanding of the genetic and neurological mechanisms that underpin dyslexia ought to lead us to being able to discriminate dyslexics from other poor readers according to their underlying causes.  But they believe that our understanding is not yet detailed enough.

Discrepancy definition
Their greatest scorn is poured on the idea that searching for a discrepancy between reading and other cognitive attainments, as summarised in IQ measures, is a good starting point to define true dyslexia.  Following Keith Stanovitch’s provocative question posed 25 years earlier (Does Dyslexia Exist?), Grigorenko and Elliot repeat the claim that IQ does not predict reading ability, so that trying to detect discrepancies between them is like comparing chalk with cheese – irrelevant.  Furthermore it is alleged that whether a poor reader has such a discrepancy or not, they all suffer the same phonological problems which can be successfully treated in the same way - by concentrated phonics training.
In fact however, non-reading IQ does predict reading ability, accounting for about 50% of reading differences between individuals.  So one can identify a group of poor readers with low, average or high intelligence, but whose reading is far behind what you’d expect from measuring their non-reading abilities, or better still comparing their reading comprehension of written material with their oral comprehension of similar material read out to them.   True, their phonological disabilities are no different than in non-discrepant poor readers. However that merely says that they’re equally poor readers.  Phonological training usually does little to help them because they have more fundamental low level sensory processing problems. 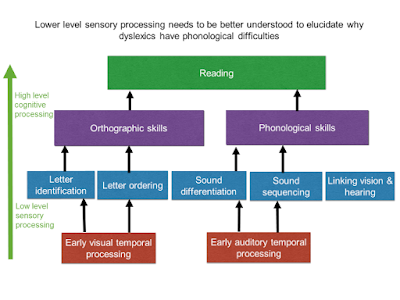 More and more evidence is now accruing that there are some children whose reading is way behind what you’d expect, because they have specific low level sensory processing impairments; these are the true dyslexics.  Their sensory difficulties seem to particularly involve ‘temporal processing’, ie visual and auditory sensitivity to changes in the environment.  Temporal processing underpins the ability to rapidly deploy attention sequentially, visually on the order of letters in a word or auditorily to hear the precise order of the sounds in it.  These rapid but precise shifts of attention are essential to form robust and readily recallable representations of word forms and sounds in memory.   Since they don’t only impact on reading, they explain many of the non reading symptoms that are frequently associated with dyslexia, such as poor visual search, mistakes in sight reading music, mispronounciations of multisyllable words (elephant as ephelant) and poor visual and auditory short term memory.
Because these temporal processing weaknesses are found only in children whose reading is unexpectedly lagging behind their other general abilities, and they can in principle be helped by appropriate sensory training, these findings offer the hope that we will soon be able to identify reliable ‘biomarkers’ that will unequivocally separate dyslexic from other poor readers, and thus contribute to improving their treatment.

Improved remediation
However these developments should not consign non-dyslexic poor readers to everlasting second class education as Grigorenko and Elliot fear; everybody sympathises with their worries on this score. On the contrary being able to diagnose dyslexia reliably should improve the efficiency and therefore the cost effectiveness of remediation, and therewith release funds for more targeted and efficient management of non-dyslexic children with reading difficulties; ie both groups should win.

Summary
To summarise the arguments – the key idea in ‘The Dyslexia Debate’ is that it is currently impossible to distinguish dyslexics from other poor readers because they all have phonological problems.  Because the diagnosis doesn’t help treatment and is obtained only for a favoured few the concept should be scrapped.
On the contrary, I argue that it is not the concept of dyslexia that should be scrapped, but this phonological theory, because it is not really a theory; it merely repeats in different words that dyslexics have difficulties with reading.  What we need is an understanding of the basic visual and auditory sensory processing impairments that cause these difficulties.  When we understand these better, as we soon will, we will have a reliable means of identifying true dyslexics, and better still, this should lead to rational approaches to remediating every child’s particular difficulties.
All children have a right to learn to read in any civilised educational system.  Abolishing the concept of dyslexia is not the right way to accomplish this.  Instead we should devote our energies to working out the individual causes of each child’s reading difficulties, so that we can best help each and every child, whether dyslexic or not.

Complementary resources to ‘Accessing Books - A Guide for Dyslexic Adults’

3 new resources that support dyslexics to engage with books are available from the Seeing Ear.  They are free downloads.  They complement the self-help guide ‘Accessing Books - A Guide for Dyslexic Adults’, detailed on this blog on 21 August 2015.

What are the contents of these resources?

Who are the resources aimed at?

Where are the resources available?
·       In pdf under the subheading ‘Guides by others’ at http://www.seeingear.org/resources/dyslexia


·       In Word from the Seeing Ear library which dyslexics are eligible to join http://www.seeingear.org/our-library

Email ThisBlogThis!Share to TwitterShare to FacebookShare to Pinterest
https://youtu.be/5ImEaEK3iKM

Today I received a link to this video from Steven Mcleish. A spoken word artist who I felt wonderfully summed up some of the experiences Dyslexics go through and the power with which they can contribute.

I found it quite moving

Reading in the Forest

This week John and I have travelled to The Black Forest in Germany to attend an exclusive conference. Presenting the research from the DRT and learning from some of the best researchers in reading in the world.
I was a little apprehensive about coming as I was busy and didn't know if I could afford the time to go but I am so very glad I did. My passion for the research has been reignited and I have traded ideas with people who's research I have admired for years.
Research was presented by the finest minds including Angela Fawcette, discussion the lack of automatisation in dyslexia; Rod Nicolson who proposed delaying explicit reading teaching in favour of training the central executive skills first. Ken Pugh and Andrea Facoetti had a good debate about the nature of the underlying causes of dyslexia and o have to admit that I found Andrea's argument well grounded in neuroscience as well as brimming with passion for the theoretical implications.
John and I also presented our work. John talked about the background to his neuronal magnocellular theory that dyslexia results from impaired magnocells across all brain systems. I had a poster which reported our findings on a recent EEG study investigating auditory stimulation responses in dyslexics in comparison to controls.
Overall my favourite part was meeting with so many fascinating researchers in such an intimate venue. It felt like being invited backstage at an extremely geeky rock concert. And it gave a similar thrill.
I just hope this inspiration continues when we return to real life. 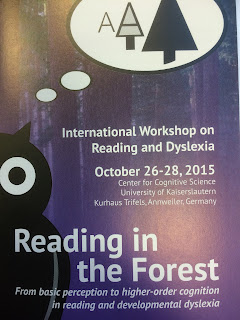